I was born in Pittsburgh, PA and raised in a small community 35 miles northeast of the City.  After receiving my Master's in Library and Information Sciences degree from the University of Pittsburgh, I accepted my first professional  position in Columbus, OH with the Mt. Carmel Hospital Medical Center and School of Nursing.  I met Hank, a professional telephone salesperson living in Anaheim, CA , while working in Columbus.  We were married in 1976 and I joined him in So. CA.  My professional career in librarianship continued as I worked both as a Hospital Librarian and then as a sales professional selling software to libraries throughout the US and Western Canada.

I first visited Las Vegas with Hank to attend the opening performance of Neil Diamond at the Aladdin Theatre.  We visited Las Vegas an average of 3 times a year while we lived in So. CA.  So it just seemed like the next logical step to move here permanently in August, 2001.  I continued my traveling sales job and Hank joined TSA in the first group of employees after the tragedy of 2001.  We both retired 9 years' ago.  We love traveling and long road trips exploring the hidden scenic highways of the US.

Shortly after moving into our home, we adopted Nell, a mixed breed dog who was our companion for the next 16 years.  As dog-lovers know, the loss of a pet is devastating.  However, we missed the patter of dog paws and within 3 months we adopted Tobi, a male Coon Hound from the local So. NV Beagle Rescue.  Fortunately, both dogs were and are good car travelers and have accompanied us on our road trips throughout the US.

I started sewing in Home Ec.  With Grandma's help, I began garment-sewing while in high school which I continued for many years.  When we purchased our town home in Cerritos, CA, I found a local quilt shop in the Mall and decided to take a class.  My first quilt was the Lover's Knot Quilt-in-a-Day pattern by Eleanor Burns.  I joined the Quilters' by the Sea Guild in Long Beach and served with a friend coordinating kids quilt kits which were donated to the local fire department for distribution.   A few years ago, I purchased am embroidery machine and am loving that aspect of sewing and quilting!

I originally joined Desert Quilters' after moving to Las Vegas.  However, my work schedule did not support much involvement.  After retiring, I began attending the Green Valley Circle; I met Patsy Musaraca there where she mentioned that she was seeking someone to accept the Membership Chair position as she was serving as Vice President.  And so began my active involvement in the Guild as Membership Chair,  Other roles followed including Programs Chair, Grants Manager,  various Chair positions on several Quilt Show Committees including Checkin and Pickup, Ribbons, Quilt Layout and Hanging and Teardown and working on several Retreat Committees.  I also serve on the Website Team managing the pages for the Quarterly Meetings, Programs, BOM and the DQN section.  I've loved taking classes from the many excellent teachers the Guild has procured  -- I always learn something!

I'm drawn to charity sewing so it was a logical place to be involved in Loose Threads.  I also worked with and served as Coordinator for the local chapter of Ryan's Case for Smiles making and delivering pillowcases to children going through cancer treatment throughout the Valley.  My work with Ryan's led me to another group which makes pieced blankets for Camp Cartwheel - the summer camp sponsored by NV Childhood Cancer Foundation.  This group has branched out to support a number of charity sewing for groups in the Valley.

A few years' ago, I began attending the Modern Quilt Guild Conferences and am a member of the Las Vegas Chapter.  It's become an annual event attending the Conference with my niece -- a great time to catch-up on her life and career!  Already registered for Phoenix in February!

I've made so many friends through my involvement in Desert Quilters'.  I'm honored to serve as President for an organization that continues to give me so much.  I look forward to meeting many more of you during my term. 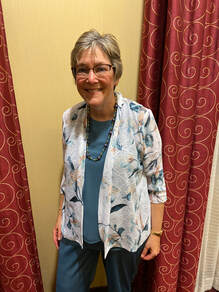 ​Vice President - Hinde Socol
​
Green Valley Circle
I was born in Lakewood, NJ, where I grew up and went to school.  I had always wanted to teach special education, so I went to Michigan State University for their excellent program  The next 30 years were spent in southeastern Michigan  as Resource Room teacher, Teacher Consultant, elementary principal and finally as an Assistant Superintendent.  Although I had made much of my own clothing early on, as I got busier with work and education, my sewing went by the wayside.  That is, until the fateful day when I went to get my 20-year-old machine serviced and the saleswoman showed me a new machine that she said had a “quilting stitch”.  I was hooked.  I bought that machine and quickly upgraded to an embroidery machine.  I started taking classes in quilting and embroidery in my free time.

In 2003, my husband, John, and I retired to San Diego.  I had decided that if I were going to relocate, it had to be perfect.  Our 12 years in San Diego certainly were wonderful.  I quickly joined the local quilt guild and worked on their various quilt shows.  My new home was 2 miles away from Quilt in a Day and getting to know Eleanor Burns was a wonderful experience.  I attended her Block Party classes and Bucket List, a monthly UFO group who finished our projects along with Eleanor.   I still help out with proofreading some of her patterns and books.  Although I claimed to be fully retired, I found myself working for a local sewing machine store for 9 years.  While there, I organized their special events, including programs with David Taylor, Walter Floriani, John Deer, Anita Goodesign, and the Stitching Sisters.  I learned so much in my years there and accumulated 6 great sewing machines.
​
Four years ago, my husband & I decided it was time to downsize.  When the first house we looked at in Henderson had a casita large enough to hold all my sewing machines, we knew we had found our new home.  Within the first month of living here, I went to the Green Valley Circle meeting and volunteered to serve as their rep.  From there I became Membership Chair and Quilt Show Chair.  I am now pleased serve on the Executive Board as DQN Vice President.

​I was born in Marion, Ohio, grew up in Gahanna, Ohio & have been in Henderson for 3 years. We moved here 3 years ago to be closer to my sister (Chris) and of course to get out of the freezing cold & snow. Dan & I have been married 29 years after meeting when we were each bowling in a league. We have 3 children:  a daughter, two sons, 4 granddaughters & three grandsons. I am a Certified Profession Coder and work for Comprehensive Cancer Centers of Nevada as an auditor & physician educator. I’ve been  an avid NASCAR racing fan since 1984 when my brother got me started watching it. I followed Bill Elliott’s career for 31 years & now follow his son Chase’s career.

I got started quilting in 2016 after Chris handed me a kit to make a small table runner & said “Here you’re going to make this.”. Most people know I love purple and while helping with the quilt show in 2017, I saw a purple quilt and after making it for our spare bedroom I was hooked. I’ve made a Nightmare before Christmas Halloween quilt for my daughter-in-law, a ‘kitty cat’ lap size quilt for my best friend, a baby quilt for my youngest grandson and one for a co-worker. I’m entering the 2019 quilt show for the first time with a jelly roll quilt my son named ‘Purple Belief’.
I started quilting about 15 years ago when a lady from my church started offering classes.  My first two projects were a table runner with a flange and the BQ2 quilt.  I was hooked!  I’ve purchased many machines and have a stash that is taking over my home since then. Most of my social activities revolve around time with my quilting friends.  In and out of Desert Quilters, I’ve made many lifelong friends who share a passion of quilting with me.  Through participation in events – from attending meetings and classes to volunteering and serving on the Board, I’ve had a wonderful time getting to know others who share my love of quilting, who understand the need to pet fabric, and the quirkiness of cutting it up just to sew it back together again!

I have previously served as President of DQN and volunteered at the Quilt Show and Quilt Retreat.  I have been married to my husband, Prince Charming, aka Ray, for over 22 years and we have four children, two grandsons, two dogs and two cats.  Besides quilting, we love to camp and travel, mostly in our travel trailer, but I’m not opposed to staying in a hotel from time to time.

​Threads of Fellowship Circle
I was born in Tempe, Arizona into a Military family.  I was very lucky that my dad was stationed in Arizona for almost 16 years.  Before moving to Germany for 2 years, I met my husband, Scott.  I graduated from Frankfurt American High School.

In 1980, I married my high school sweetheart and moved to Las Vegas.  We have 3 children, ages 42, 32 and 21.  Yes, every 10 years.  I also have 2 granddaughters from my oldest daughter ages 19 and 16.  I home schooled the last 2 of my children and my youngest is in Prescott, Arizona at Embry Riddle University studying Aeronautical Sciences and also learning to fly.  He is already a pilot with several ratings, soon to be doing multi-engine flights for this rating.  Before becoming a stay at home (home schooling) mom, I worked in accounting in several casinos and doctors offices.

I learned to sew when I was about 13 from my grandmother and my mother.  I loved using my grandma’s treadle Singer sewing machine.  I ended up taking 4 years of sewing in high school.  I like to try anything new.  I also do French machine sewing, English smocking, machine embroidery but my favorite is being creative with my quilting.  I worked at the Bernina shop 30 years ago and taught beginning sewing and quilting.  We have it so good now as the tools we use are so much better than they were back then.

I am involved with Threads of Fellowship, a ministry at our church.  We have been involved in the Las Vegas Astronomical Society for over 30 years.  We have annual camping in Cathedral Gorge, Nevada with anywhere from 10 to 30 telescopes pointing towards the sky.  In 2017 a group of us went to Rexburg, ID to witness the total eclipse.  This was my 3rd total eclipse: we went to Mexico in 1991 to see the longest eclipse of the century, almost 7 minutes and the Caribbean in 1998 for a 4 minute one.
​​